If you have been using Java for quite some time (since 1.4) and wanted to maintain binary data compatibilitiy, chances are high, that you are relying on the com.sun.xml.namespace.QName.useCompatibleSerialVersionUID=1.0 system property. This will ensure your JVM creates and reads serialized javax.xml.namespace.QName Objects with the same serialisation version UID compatibleSerialVersionUID = 4418622981026545151L. This is especially needed, if you use serialization to store or transmit object trees containing XML objects (and you did not serialize the XML to actual text).

The actual serialVersionUID of QName is meanwhile -9120448754896609940L, but with the compatibility hack you did not only generate objects with the compatible version, but also accepted them.

When you move to Java beyond 8 however, this might break. The backward compatible logic has been removed in JAXP of Java 11. This means your QName instances saved with a not so old Java runtime of 8 (but with the compatibility flag set), suddenly do not work anymore.

Bummer. This is one of the reasons why it is important to follow up on such compatibility hacks and fix them for good. Otherwise it will bite you when you port to newer Java versions just a few decades later.

In JDK11 the compatibility function was removed, with a somewhat sarcastic comment:

Certainly JDK 1.5 up until 10 did use the default UID, but not if you had used the compatibility flag the whole time.

So the following test code will demonstrates the servialVersionUIDs returned by different Java versions, with and without the compat flag:

As you can see, on the JDK11 the compat flag is ignored: only the new default serialVersion UID is used.

With a little modified ObjectInputStream (and there are many reasons to have a custom OIS, like this replacement, but also for hooking into modularized classloaders or doing object filtering) all variantes can be read without the need for a compat flag:

The code for this tester can be found in a GitHub Gist (including test vectors and complete sample output).

If you have used JNDI to connect to a Microsoft Active Directory LDAP Server you might see the Warning Event 2886 of source ActiveDirectory_DomainService (every 24 hours) telling you, that you should turn on LDAP Signing. This is also strongly recommended by Microsoft in their latest Security Advisory. They also will turn this on by default in the March 2020 (was January) Windows Server update.

I am not sure if this will actually happen, since a lot of legacy LDAP clients might need to be fixed first. I specifically had a look at Java with the LDAP Naming provider. (Update: as predicted Microsoft has postponed this for now).

If you use a simple bind or a default DIGEST-MD5 with no TLS (LDAPs) and no integrity or confidentiality protection you get the following exception for those Domain Controllers with the additional integrity=2 setting:

If you use TLS (ldaps) instead, then you don't need to worry about signing. In fact in this case even simple binds will work. (And just for completeness, if you use SASL then you can't request auth-int or auth-conf in the TLS case with Microsoft Directory Service).

Since I was currently playing around with making JavaWeb Start of IcedTea-Web a bit more robust I was collecting the registry keys where JWS would associate itself with files and URL schemes.

As a result I created a Windows Registry export file which DELETES all those locations, so you have a system reset to the beginning (before you reinstall Java SE or OpenJDK installers). Here is the file, in case you need something similar. Note that it only deals with JNLP related entries, no other settings from JDKs are destroyed.

In case you wonder Firefox will remeber the JNLP entries in the handlers.json file in the profile. I make it a habit to delete that file every now and then.

Ich werde nicht auf die mobilen Java Profile oder Android eingehen. Und über Java 8 gibt es in dem Bereich keine Neuerungen zu vermelden.
At $EMPLOYER we are developing and offering (Java based) COTS Enterprise Software to a wide range of customers. And while it looks like customer demand seem to concentrate on the various Linux enterprise distributions as well as Windows Server, there are of course still customers with different strategic platforms for Mission Critical applications. This includes AIX, HP-UX and Solaris which we all officially support. For a specialized ISV it is hard to have test systems for all those platforms combinations and keep up with the latest patches and Java versions. This is especially true if you do not want to maintain a whole datacenter full of test equipment. Luckily most of the system vendors offer some sort of partner program and provide opportunities to test. HP AllianceONE Partner Program Today I want to blog about the HP offering called Cloud Operating Environment (CLOE). As an HP AllianceOne Partner Program member we have access to this offering and can order virtualized HP-UX machines on a self-service portal for the purpose of porting, integrating and troubleshooting customer problems. The standard machines offered are OK for installation and compatibility testing or creating documentation for it. Simulating larger environments and doing load-tests requires different agreements. 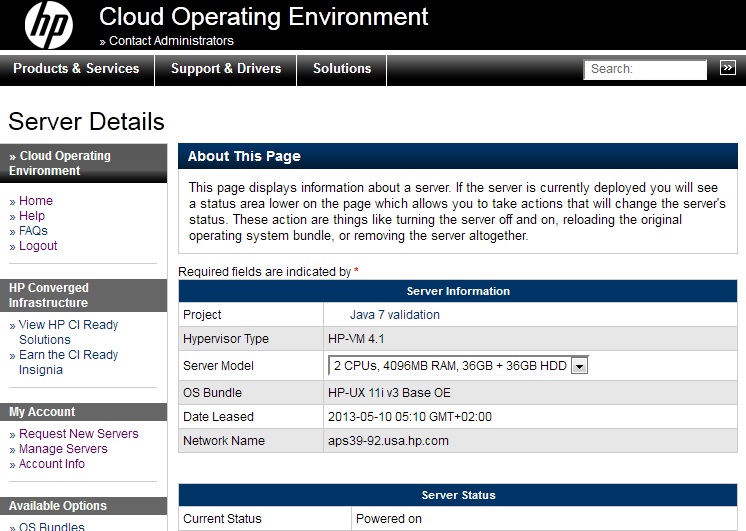 When ordering a new "Project" you have to give some details about the work you are planning to do (but I had actually never denied any request). Most of the work is related in trying out installer, shell scripts as well as Java dependencies. Remote Shell Access After ordering a Server (for example the medium configuration of HP-UX 11i v3 Data Center OE with 2 CPUs, 4GB RAM and 2 x 36GB HDD). After the server is provisioned (which takes about 12 minutes), you will receive an e-mail with the SSH key for root user. This SSH keyfile can be converted into a PuTTY .ppk file with the use of the PuttyGen Tool. The SSH access is the only open incoming network connection, so you need the SSH port forwarding feature available in PuTTY if you want to access or provide remote services. The login is a bit slow, I discovered, that it helps to put the option UseDNS no in /opt/ssh/etc/sshd_config to speed up the SSH login process. Otherwise you need to increase login timeout limits of some SFTP tools. 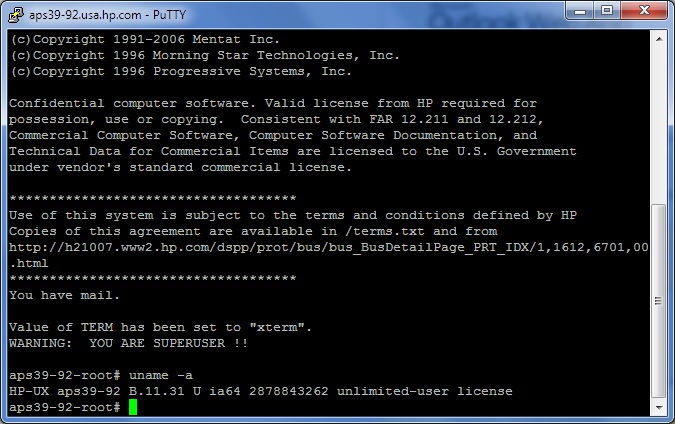